The AFRAS AMVER Award is presented by the Association for Rescue at Sea, Inc. (AFRAS), an organization made up of retired members of the U.S. Coast Guard and U.S. Navy. The award honors the merchant vessel that made the most remarkable rescue effort during the previous year.

The Tohmisan Maru (called the C.S. Sunshine at the time) rescued 24 Chinese seafarers whose cargo ship was taking on water 700km west of Guam on January 20, 2014. 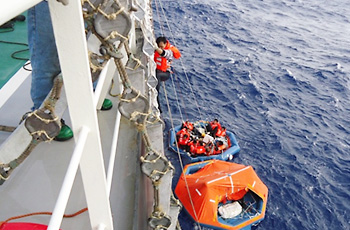 Rescue operations as seen from the Tohmisan Maru (C.S. Sunshine at the time)

(*1) The Association for Rescue at Sea
An honoring association, established in 1976, and organized by the former U.S. Coast Guard and U.S. Navy members. The association started the AFRAS Gold Medal for Heroism in 1982 with the goal of raising the morale of U.S. Coast Guard personnel, and the AMVER award in 1996, for merchant vessels that contributed to the rescue of shipwrecked seafarers.

(*2) Please refer to the release on January 29, 2014 for details of the rescue activities.
MOL Bulker C.S. Sunshine Rescues 24 Seafarers from Disabled Freighter West of Guam