Muto met with Mr. Manuel E. Benitez H., Deputy Administrator of the Panama Canal Authority (ACP) and other staff and presented the picture of M/V KONGOSAN-MARU in appreciation of the Panama Canal's long-term relationship with MOL.

100 years ago, on June 2, 1915, the M/V KONGOSAN MARU became the first MOL-operated vessel to transit the Panama Canal. The vessel began its voyage in Kobe on March 1915, and called at Seattle, Portland, San Francisco, and San Pedro to discharge general cargo. Then, it sailed to Chile to load cargo, after which it transited the canal before making calls at Norfolk and Philadelphia and returning to the canal.

MOL has moved proactively to expand its businesses since the day of establishment in 1884. MOL will provide further diversified, higher quality services tailored to customer needs. 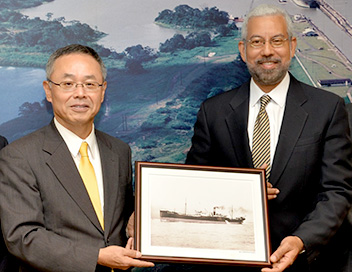 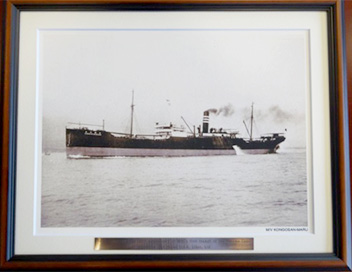