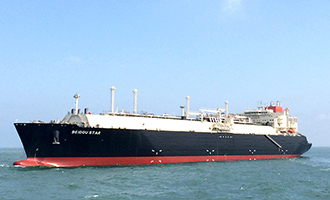 Before the delivery, the naming ceremony was held at the Hudong shipyard on November 6.

This ship building project marks a number of "firsts" – the first use of a Chinese shipyard by a foreign shipping company, the first time for a Chinese Energy major PetroChina Company Limited to participate in an LNG transport project, and the first co-ownership of LNG carriers between the China's major ship operator, China Shipping (Group) Company and PetroChina.

MOL has assigned technical experts to the shipyard since January 2011 to ensure strict quality control and safety standards during the construction process. MOL also formed a multinational Japanese/Chinese ship construction and supervision team and raised the profile of the project – the first time a non-Chinese shipping company has built an LNG carrier in China.

Starting with the first vessel, the PAPUA, which was delivered in January 2015, the project has progressed smoothly, thanks to the cooperation of everyone involved. In addition, the trusting relationship that MOL has developed with its Chinese partners in this project has led to another (*2), which will involve six newbuilding LNG carriers for China Petroleum & Chemical Corporation (SINOPEC). MOL joined this project in April 2013. These vessels are now under construction at Hudong's shipyard. Those vessels, along with the four for the ExxonMobil project will bring the total of newbuildings to 10 by 2017.

Aiming toward its goal of "solid growth through innovative changes" set forth in the midterm management plan STEER FOR 2020, MOL continues to offer value-added services to customers all over the world, by using its experience in successful international cooperative projects, the know-how and network it has built as one of the world's leading owners/managers of LNG carriers.

（*1）For details, please refer to the press release on March 3, 2010:
MOL Signs a Contract for Long-term Charters of LNG vessels by ExxonMobil,
and the release on January 17, 2011:
Hudong-Zhonghua Selected to Build LNG Carriers for PNG and Gorgon Jansz LNG Projects.