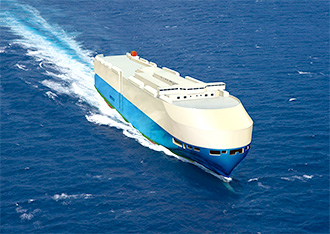 MOL has already developed the wind resistance-reducing car carrier Courageous Ace (*2), which received the Ship of the Year 2003, the new energy-saving windshield for containerships to reduce wind resistance (*3), and a new prototype sailing rig called the "Power Assist Sail." (*4) The company is participating in the "Wind Challenger Project," (*5) promoting research and development on ways to cut wind resistance and utilize wind to help propel the merchant ships of the future. The innovative bow design introduced today is a result of those efforts.

The MOL Group has launched the "Senpaku ISHIN" project to develop innovative new vessels that will reduce the environmental impact of vessel operations. It continues R&D on a range of environmental technologies, and works to protect the environment by reducing the volume of CO2 emissions generated by vessels.

(*5) "Wind Challenger Project" is a development project, led by the University of Tokyo, of ships that are assisted by propellers mainly based on sailing rig utilized a power of wind. Other than MOL, shipping company, ship's class and shipbuilding company and others are attended.