TOKYO - Mitsui O.S.K. Lines, Ltd. (MOL; President & CEO: Junichiro Ikeda) today announced that the company conducted a tabletop drill, based on a scenario in which a VLCC managed by its group ship management company collided with another vessel in Suonada, West Seto Inland Sea, and oil spill occurred.

The drill was held on Monday, May 23, with the goal of strengthening the company's emergency response structure, which is based on the MOL Group Corporate Principles - protecting the environment by maintaining strict, safe operation and navigation standards. The exercise was also designed to ensure swift reporting to concerned parties both inside and outside the company, setting up a response team, and ensuring the smooth, precise communications that are so critical in such a serious incident – in this case involving an MOL-operated vessel managed by its overseas ship management company.

Under the drill scenario, a VLCC collided with an ocean-going containership while heading north off East Himeshima, Oita Prefecture. The collision generated caused damage to the hull, cargo flew overboard into the sea, and after the collision the vessel had possibilities of contacting with fish boat around there. The first report of the incident went immediately and MOL then organized an Emergency Control Headquarters within the company and began first-response measures and procedures that included information gathering, communications among the concerned parties, and directions and instructions to the vessel, followed held a joint media response drill. 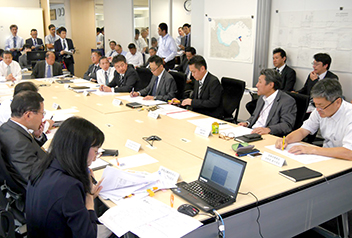 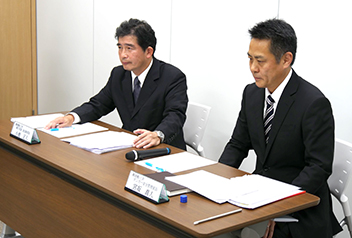