MOL Presents Long-Service Awards, Hosts Family Day for Filipino Seafarers
- Appreciation for Contributions of Seafarers and Support by Their Families - 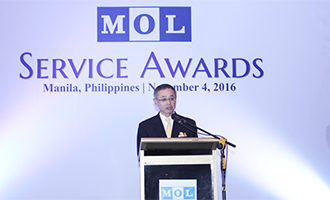 Awards and recognition went to seafarers with 15 years of service aboard MOL-operated vessels and a total of about 80 awardees and their families attended. MOL Chairman Koichi Muto expressed appreciation for the contributions of the seafarers who play a key role in safe vessel operation, and their families who support them during their months away at sea. A recipient commented his motivation to get promoted, while another recipient thanked MMM's attention towards his family during his duties at sea.

Family Day was held at an amusement complex in Manila, drawing about 3,500 seafarers and their families. Chairman Muto expressed his gratitude for their support towards safe operations. He also greeted attendees to unite as "One MOL" and drive forward safe operations of vessels together.

MOL Group continually conducts such programs in the Philippines and other countries that are home to seafarers, striving to provide a pleasant working environment while expressing appreciation for their contributions to the company's success.