TOKYO-Mitsui O.S.K. Lines, Ltd. (MOL: President & CEO: Junichiro Ikeda) today announced that it has finalized the logo design that will grace the hulls of the next-generation car carrier "FLEXIE" (*1), which will be built and delivered at Minaminippon Shipbuilding Co., Ltd. (President: Ryutaro Ikebe; Headquarters: Oita, Japan). The first in a series of four ships is slated to join the fleet in late 2017.

The design marks a complete departure from current car carriers, with "MOL", the abbreviation of our group name, and the letter "A", which stands for "MOL ACE" (*2), and a white line, which expresses the company's determination to connect its long history with customers to the future in a seamless manner. The design is applied boldly on the side of the hull.

The color combination of white and the same blue used in the MOL company logo ensures high visibility, with the goal of increasing "MOL ACE"'s brand power.

The name "ACE" has long been associated with MOL-operated car carriers, and now reflects the company's quest for "advancement" in environmental protection and new technology. The "FLEXIE" marks MOL's latest progress in this quest, with a new hull design (*3) and deck structure.

MOL continually strives to meet ever more diverse customer needs based on the keywords "safety" and "reliability" under its new global brand, "MOL ACE". 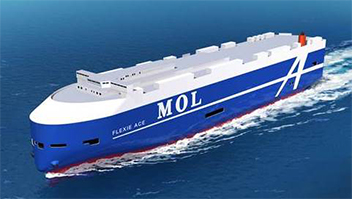 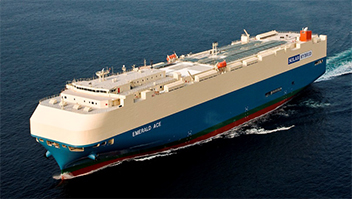