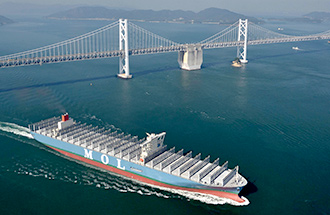 The MOL Truth is the first containership with a capacity of over 20,000 TEU built in Japan, and the fifth in a series of six 20,000 TEU containerships that are operated by MOL (*1). On October 25, it was named the MOL Truth. The new containership is 400m long, with a breadth of 58.5m, and has a loading capacity of 20,182 TEU. It will ply the Asia-Northern Europe trade as part of THE Alliance.

The MOL Truth adopts a host of advanced technologies to reduce its environmental impact, such as low-friction hull paint, a high-efficiency propeller and PBCF (*2), a high-efficiency engine plant, and an optimized hull shape. These features will reduce CO2 emissions by 25-30% per container in comparison with MOL-operated 14,000 TEU-class vessels. The ship's design also allows conversion to LNG fuel, in anticipation of stricter standards on vessel exhaust emissions in the future.

The sixth and final vessel in the series is under construction at Imabari Shipbuilding's Marugame Shipyard and is slated for delivery in January 2018.

MOL continues to push ahead with its "NEXT -MOL SMART SHIP PROJECT" (*3) technology development initiative, while providing customers with top-quality service as strives to become the world leader in safe operation and environmental protection.