Containership MOL Truth Earned 'Ship of the Year 2017'
- A 20,000TEU Container Ship, One Of The World’s Largest Built in Japan -

The award is given for the highest levels of technology, design, and social responsibility among vessels made in Japan by JASNAOE.

The MOL Truth earned high evaluations as a cutting-edge "eco ship" that not only exemplifies MOL's safe operation and environmental conservation policies, but also makes full use of the most advanced telecommunication and IoT/AI technologies.

In addition, the judges regarded her as a historic milestone in Japan's shipbuilding industry because Imabari Shipbuilding Co., Ltd. (President: Yukito Higaki, Headquarters: Imabari-shi, Ehime Prefecture), adopted the latest ship construction technology and hull structure design, and because she was the largest containership ever built in Japan.

The MOL Truth currently is servicing the Asia-Europe route operated by Ocean Network Express Pte. Ltd. (ONE), making a great contribution to the expansion of ONE's services as one of the world's highest-capacity containerships.

MOL, as one of the world's largest shipping companies, continues to strive toward further expansion of its transport services by using its accumulated experience and know-how, while more precisely meeting customer needs and proactively introducing various technologies that reduce the environmental impact of vessel operation. 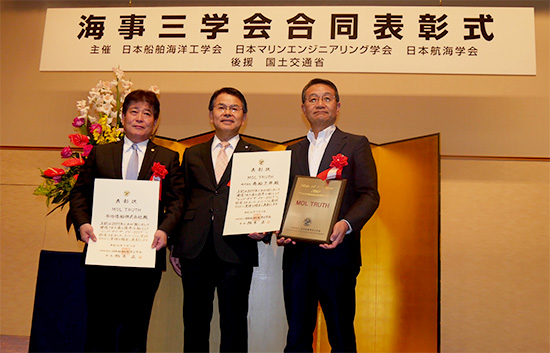