Leveraging its high-speed performance, the Ishin will escort large-size freighters during port calling in/out operations. The MOL Group will accumulate know-how on LNG-fueled vessels through the operation of the Ishin.

The Ishin is Japan's first tugboat built to conform to the IGF code (*2). In addition, its excellent environmental performance earned the top rating of four stars from the Ministry of Land, Infrastructure, Transport and Tourism (MLIT)'s energy-saving rating program for Japan's coastal ships (*3).

The Ishin is powered by two advanced 6EY26DF dual-fuel commercial marine engines manufactured by Yanmar Co., Ltd. (President: Takehito Yamaoka, headquarters: Kita-ku, Osaka) and features a removable LNG fuel tank mounted on the exposed deck at the stern of the ship. This enhances convenience in bunkering, maintenance, and inspection. The image of the Ishin, designed with extensive use of green motifs and four stars featured on the fuel tank, represents the tug's four-star achievement under the MLIT's energy-saving rating scheme, and conveys MOL's initiatives on reducing environmental impact by LNG fuel.

MOL takes a proactive stance in popularizing the use of LNG fuel (* 5) by promoting the development of LNG fuel supply systems in Japan and overseas (*6), to address today's growing environmental demands among both customers and society at large. 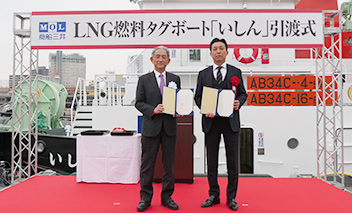 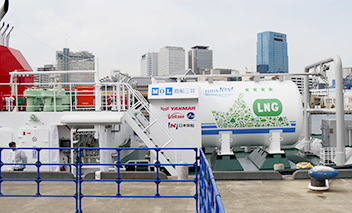 (*1)The procedure to supply LNG fuel from an LNG truck on shore to vessel.

(*2)The IGF Code stands for the International Code of Safety for Ships using Gases or other Low-flashpoint Fuels, aimed at ensuring the safety of LNG-fueled vessels. The code establishes safety requirements for vessels that run on gas and low-flashpoint fuels, and took effect on January 1, 2017.

(*5)MOL participates in the LNG fuel supply business through long-term charter contracts for LNG bunkering vessels around the world. For details, please refer to the following press releases.

(*6)MOL established the Bunker Business Office to accelerate its initiatives on LNG and other alternative vessel fuels, and is taking an integrated approach to entering the business of supplying LNG and other fuels. For details, please refer to the press release on February 24, 2017:
MOL to Restructure Organization