The project members will study collision avoidance algorithms and autonomous navigation/remote ship operation system. The system will be assessed by active watch officers using a ship handling simulator and actual vessels, in preparation for installing on in-service vessels.

In the project, AI technology (Note 1), such as rule-based AI and deep reinforcement learning technique, and Obstacle Zone by Target (OZT) (Note 2) algorithm are used to make a decision to avoid collision dangers and to take actions to avoid the target ships.

MOL has been already categorized its research on navigation support systems related to "recognition" such as "AR Navigation Information Display System" (Note 3) as its "FOCUS EYE" series. In order to accelerate its programs to advance safe operation and to realize autonomously navigated vessels (Note 4), MOL has newly set up "FOCUS BRAIN" series to categorize navigation support systems related to "decision making," such as the collision avoidance.

MOL has moved ahead with advanced support of safe operation and reduction of its environmental impact, as set out in the MOL's Smart Ship Project "ISHIN NEXT", which began in November 2016, and aims to become customers' first choice as a logistics business partner by applying ICT technology to improve service quality and efficiency.

Ruled-based AI: A method of decision making of action in a given condition using rules made by human.

Deep Reinforcement learning: A method of decision making of action using knowledge learned by trial and error by machine. (one of the machine learning's algorithms).

(Note 2)
Obstacle Zone by Target (OZT) is an area where a vessel may possibly collide with the other vessel sailing around it (other vessel) when it is aimed at the area. Our algorithm conducts an evasive maneuver by navigating a course that avoids OZT.
Please refer to the following two press releases for details.

(Note 4)
Please refer to the following diagram and press release. 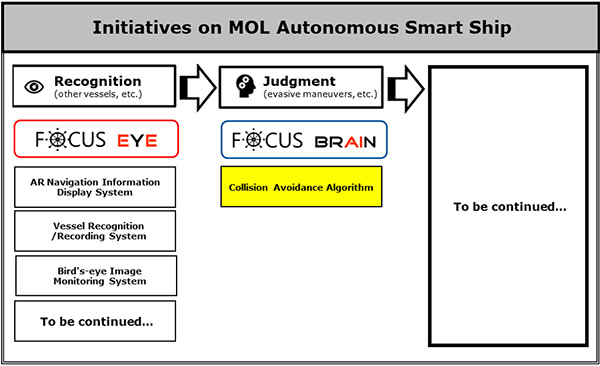