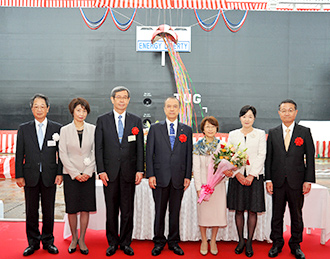 Among the crowd of well-wishers on hand for the ceremony were Tokyo Gas Co., Ltd. President Michiaki Hirose, who gave the name Energy Liberty to the vessel, after which his wife cut the rope.

The Energy Liberty will be the eighth LNG carrier owned and managed by Tokyo LNG Tanker. MOL will directly manage six of those vessels, including this newbuilding vessel. After delivery, the vessel will transport LNG from the Cove Point Project in the U.S. to Tokyo Gas.

MOL takes a proactive stance in providing its customers with safe, high-quality LNG transport services, backed by experience and know-how accumulated as a world-leading LNG carrier owner and management company.

(*) SPB stands for Self-supporting Prismatic shape IMO type B. Its structure is designed to prevent the occurrence of sloshing.