Among the many guests on hand for the ceremony was Tokyo Gas President Takashi Uchida, who named the vessels the Energy Innovator and the Energy Universe after which his wife cut the rope.

The vessels are the 10th and 11th LNG carriers that Tokyo LNG Tanker Co., Ltd. (headquarters: Minato-ku, Tokyo; President: Satoshi Tanazawa) owns and manages. MOL is involved in the management of eight of those ships, including the two newbuilding carriers.

Leveraging its accumulated experience and knowledge as one of the world's leading LNG carrier owners and management companies, MOL continues to offer safe, high-quality and efficient LNG transport service to customers. 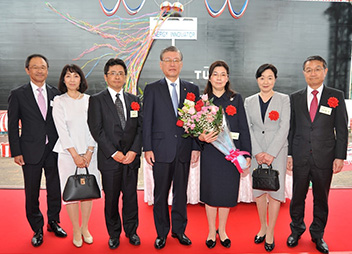 At the naming ceremony in front of Energy Innovator 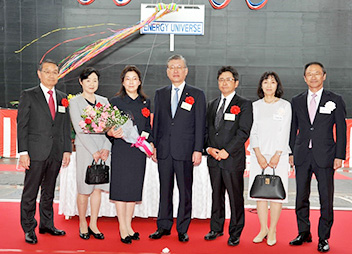 At the naming ceremony in front of Energy Univers

(*1) MOL manages three of the vessels, which will be launched mainly to supply Tokyo Gas with LNG the Cove Point LNG Project. For details on the first vessel, please refer to the October 16, 2017, press release:
Newbuilding LNG Carrier for Tokyo Gas Named Energy Liberty - The Vessel Will Transport U.S. Shale Gas -

For other details, please refer to the following press releases.

(*2) Self-supporting Prismatic shape IMO type B (SPB) has a structure to avoid sloshing problem, which loaded LNG brings impact inside wall of the cargo tank, giving damage the tank.